Started caving with the GSS back in September 1983 and haven't looked back since! Over the years have done a fair bit of 'proper' caving in the UK, Ireland (N&S), Belgium, France and the USA. Have also participated in a varying number of digs (some successful, some not) to open up new cave and mine sites (Wales, Forest of Dean & Cotswolds). Now tend to be more involved in Cotswold stone mines and have been involved in the re-opening of a number of sites, extending others and getting GSS access to others .... the quest continues to find more mine passage hidden away ... it's there .... somewhere!

A little while ago the club was approached by the organisers of the (Bristol) Redcliffe Caves open day weekend, as part of the wider Bristol Open Doors weekend. The organisers were after cavers who could help out with running the event and a number of club members volunteered to take part …. Joe Duxbury, Malc White, Alex Moule, Tom Stickland, Jamie Morris and Jon Maisey. Prior to the w/e an number of prelim/recce visits were carried out by the volunteers and a suitable route was mapped out through the caves. On the friday the volunteers set up all of the tapes/barriers/arrows etc required for the public along the route …. not a 5 minute job! Later on the friday evening the local BBC film crew from ‘Points West’ were there to film a short item about the caves for the w/e.

The following Saturday & Sundays went very well, there were approx 800 visitors per day and everyone got a great deal out of the w/e. Talking to the public to explain the history of the caves (and nearby other underground sites) went down very well and we got a lot of good feedback, including info of other underground links to the cave etc.

Joe had also put together and brought with him the club stand in order to promote the club, raise its profile and hopefully get a few more members (time will tell).

Everyone had an excellent w/e & we’ll definaley be back in 2020 …. more volunteers required!

See the photos for a rough overview of the w/e.

Some GSS members (Jon Maisey in particular has been a member of the group since the 1980s) have a long association with a group called ‘Subterranea Britannica’. Sub Brit (as they’re known) are interested in any underground spaces that are either man-made (tunnels, mines, bunkers etc) or have been used by man (ie caves turned into dwellings or hiding places etc).

In September 2015, Jon Maisey, with help from Trev Perkins, Phil Howells and Maurice Febry, organised a Sub Brit weekend (based in Cirencester) which took them around a number of Cotswold sites (Whittington, Windrush, Lower Balls Green and QuarryHill). the w/e was judged to be a great success and earned the GSS a donation of £200.

Anyway, some while ago, Jon set up a newsletter exchange between Sub Brit and GSS. They get our newsletters/journals and we get their ‘Bulletins’. The Sub Brit bulletins are really very professionally put together and well worth a read …. speak to the librarian, John Cliffe for the library copies.

As part of the exchange, Sub Brit sometimes refers to articles in the GSS newsletters and one of these was an article I wrote in regard to GSS exploration of Sapperton Canal tunnel. I was then asked if I could write an article for the Sub Brit magazine. This I then did but only after many hours spent at the pc researching facts, typing and sorting out photos etc. The end result for this was that ‘Bulletin 41’ published the Sapperton article (and an account of the Sub Brit Cotswold w/e in 2015) and had as its front cover photograph a picture of the tunnel with Rob Tyrrell as the model! (see the attached scan)

The article published in the Bulletin has now been given to Malc and will be published also in a forthcoming GSS newsletter.

This month’s social was a wander around Cleeve Hill lead by Dave Appleing.

Starting off near to the clubhouse, Dave lead the group south along the escarpment (roughly), taking the various features along the way (ie the exposed quarry faces and also the site of Isaac’s Cave. Unfortunately the site is currently inaccessible due to a collapse in the entrance. Isaac’s Cave was the site of the Cave Rescue Group’s first callout, some time in (possibly) the early 1960s.

From Isaac’s Cave it was then across the common/golf course to drop down the back towards where the old quarries are. Looking at some of the quarry workings and the spoil tips etc, Jon, Phil and Ian are convinced that at least one site requires further investigation as it looked like it ‘could’ be the entrance to underground workings 🙂

Once back at the cars it was time for everyone to move their cars over to a site at Nottingham Hill that Dave suggested would be a good place to park up for the BBQ etc.

Once parked up, Jon got out the latest GSS item of kit ….. a gas BBQ 🙂 This has been bought for all club members to use on outdoor socials, rather than having to rely on sometimes unreliable disposable ones (and which take quite a while to get going).

So, for the next social … bring your food to cook and Jon willl bring the BBQ.

On a hot summer day in the Forest of Dean, the GloucesterShire Cave Rescue Group (GCRG) held one of its 3-monthly training sessions and today it was to be held at ‘Miss Grace’s Lane’ cave, down towards Lydney.

Briefly, the idea was to attend to a casualty (with broken bones etc) at the bottom of the final pitch and to take them out of the cave quickly and safely.

The first team (first aiders) went in to attend to the casualty and establish the situation before then further teams went it to do the following:

1 – establish the Cave Link comms to the surface

2 – get the casualty into the stretcher, ready for moving

3 – move the casualty to the start of the pitches and prepare for hauling out.

3 – while all this is happening, the surface team was setting up the surface hauling kit, including a new piece of kit, the Larkin Frame. This is specifically designed to help haul up casualties from shafts/over cliff edges etc.

Overall, the practice went quite smoothly and the casualty was out after a number of hours (out by about 15:00’ish I think) but there were (as ever) things that GCRG could learn from the experience (this is the point of a practice), minor niggles etc.

Although GSS attendance was pretty good (15 or 16 club members), it was less so from the RFDCC & there were times we could have done with more people underground.

A few photos from the day

Cleaning & sorting the kit after the exercise, at the GCRG depot

GCRG is the only organisation in the county that is able to come to the aid of cavers underground & is made up 100% of volunteers who do this on top of their normal caving activities. GCRG always needs more volunteers to help out and so if you’re not a member but would like to learn a lot of caving-related skills & help put something back into the local caving scene, then please contact Paul Taylor or Pete Turier (or me, Jon Maisey).

The next GCRG training event is on the 4th of September.

In order to promote this event further, here are some more details of what’s going to be happening on the 17th of Sept and why it would be excellent to try to have as many GSS members there as possible.

The venue is the Holiday Inn, Barnwood, Gloucester. Very easy to reach from whatever direction you may be coming from.

The evening will be to celebrate the 60th year since the formation of the club in 1956 and we will be having in attendance, two of the original founder members (Paul Hayward and Dave ‘Sparks’ Parker). If it wasn’t for the efforts of the founding members, I’d not be typing this right now & you’d not be reading it either as the GSS would not exist.

In the following 60 years the club has come a long way and achieved a lot, but for the purposes of the event on the 17th, we’ll be concentrating on what the club has been up to since the 50th anniversary in 2006.

As part of the evenings entertainment, we have been able to obtain the services of a professional magician, Sam Strange. Sam and his brother Barney are very keen to explore the local stone mines and have already had a very good trip into Windrush.

Sam Strange is a full time, professional entertainer who has spent years refining an act suitable for all events. He has been interested in the art of magic from childhood, and has funnelled his enthusiasm and passion for the art, into an entertainment business.

He has been fortunate enough to perform professionally for 9 years. Sam is one of the few magicians in the country who can combine a youthful enthusiasm with experience and a thoroughly professional attitude.

Sam learnt his craft before joining the Thames Valley Magicians Guild. He quickly progressed by joining the International Brotherhood of Magicians and was unanimously voted into the Magic Circle aged 22. He went on to win 2 awards for close up magic and has appeared on television and radio. He was a featured performer, alongside his double act partner, on prime time and daytime television. He has also acted as a hand double for an ITV television drama.

Sam has recently been promoted to become an Associate Member of the Inner Magic Circle. This is the highest level achievable through examination and he is now one of the youngest members to hold this prestigious accolade.

“A fantastic performance and a genuine talent.
Just amazing”Jonathan Ross” 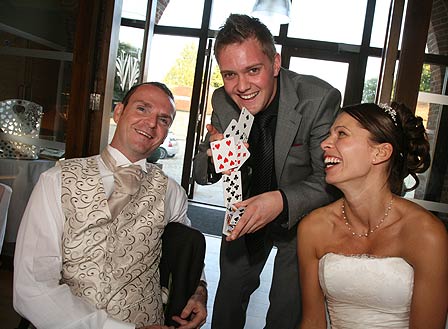 In addition to Sam, we will also have a number of displays showing the main things that the club has been up to since 2006 & also hopefully highlighting the very wide variety of underground sites that the club has an interest it and the trips made … everything from hard sporting trips into Welsh caves, to Cotswold mine digs and foreign expeditions to Montenegro and Namibia.

Together with the display boards we’ll also have at least one very special presentation to make (come along to find out what it will be), a constant slide show (hundreds of GSS caving images) showing what the club’s been up to & hopefully photos of as many club members  as possible.

There will be a raffle to raise funds for GCRG (so please dig deep, we all benefit)

There will be a celebratory cake made specially for the event

Every ticket holder will receive (after the event) a special DVD presentation covering the club’s activities since 2006 and also a special anniversary newsletter/journal. Both the DVD and the journal we also produced for the 50th.

The whole event is designed not to be formal, but to be just a great social event where everyone can spend the evening talking and catching up with friends etc.

Tickets are £20 each (only 50p more than they were in 2006) and can be bought from the Secretary, Joe, but if you want to ‘buy’ the tickets online, just send the appropriate amount to the club’s bank (details are … ‘Gloucester Speleological Society’, Account number 13941260, sort code 77-27-06) and then send a covering email to Joe Duxbury and he can then allocate you a ticket.