Some GSS members (Jon Maisey in particular has been a member of the group since the 1980s) have a long association with a group called ‘Subterranea Britannica’. Sub Brit (as they’re known) are interested in any underground spaces that are either man-made (tunnels, mines, bunkers etc) or have been used by man (ie caves turned into dwellings or hiding places etc).

In September 2015, Jon Maisey, with help from Trev Perkins, Phil Howells and Maurice Febry, organised a Sub Brit weekend (based in Cirencester) which took them around a number of Cotswold sites (Whittington, Windrush, Lower Balls Green and QuarryHill). the w/e was judged to be a great success and earned the GSS a donation of £200.

Anyway, some while ago, Jon set up a newsletter exchange between Sub Brit and GSS. They get our newsletters/journals and we get their ‘Bulletins’. The Sub Brit bulletins are really very professionally put together and well worth a read …. speak to the librarian, John Cliffe for the library copies.

As part of the exchange, Sub Brit sometimes refers to articles in the GSS newsletters and one of these was an article I wrote in regard to GSS exploration of Sapperton Canal tunnel. I was then asked if I could write an article for the Sub Brit magazine. This I then did but only after many hours spent at the pc researching facts, typing and sorting out photos etc. The end result for this was that ‘Bulletin 41’ published the Sapperton article (and an account of the Sub Brit Cotswold w/e in 2015) and had as its front cover photograph a picture of the tunnel with Rob Tyrrell as the model! (see the attached scan) 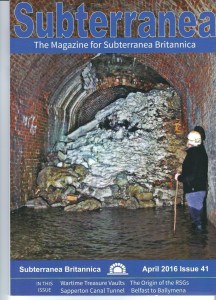 The article published in the Bulletin has now been given to Malc and will be published also in a forthcoming GSS newsletter.